“We want our programming to be meaningful for our students who will be out in the workforce,” said Bill Armaline, director of the Human Rights Institute and associate professor of sociology at SJSU. “That means it needs to speak to real issues that their families and communities face.”

“This is an extraordinary time because we have a woman of color as the vice president of the United States. Our series speaks to this time and connects the deep history of black women as political forces in our country,” said Halima Kazem-Stojanovic, lecturer in journalism and human rights and the journalism coordinator for the Human Rights Institute.

Armaline said that in 2015, the Human Rights Institute (then a “collaborative”) brought together founders of the Black Lives Matter movement, including leaders from organizations like We Charge Genocide (Chicago), M.O.R.E. (Ferguson, MO), and the Ella Baker Center for Human Rights (Oakland) with long-time movement leaders like renowned sociologist Harry Edwards, ’64 Social Science, ’16 Honorary Doctorate, for two days of organizing and educational workshops on the SJSU campus around anti-racism and criminal justice reform.

“It was our most successful event in terms of students, panelists and organizers coming together—a lot of community organizing happened as a result,” Armaline said. “This year, we thought what better way to launch the Human Rights Institute than to return to some of these issues and invite Dr. Angela Davis to reflect on the last five years. We’ve seen a rise and explosion of white supremacist organizations throughout the country. Now we’re asking, how do Black feminism, socialism and the work of Dr. Davis give us any guidance about how to grapple with the human rights struggles of our day?” 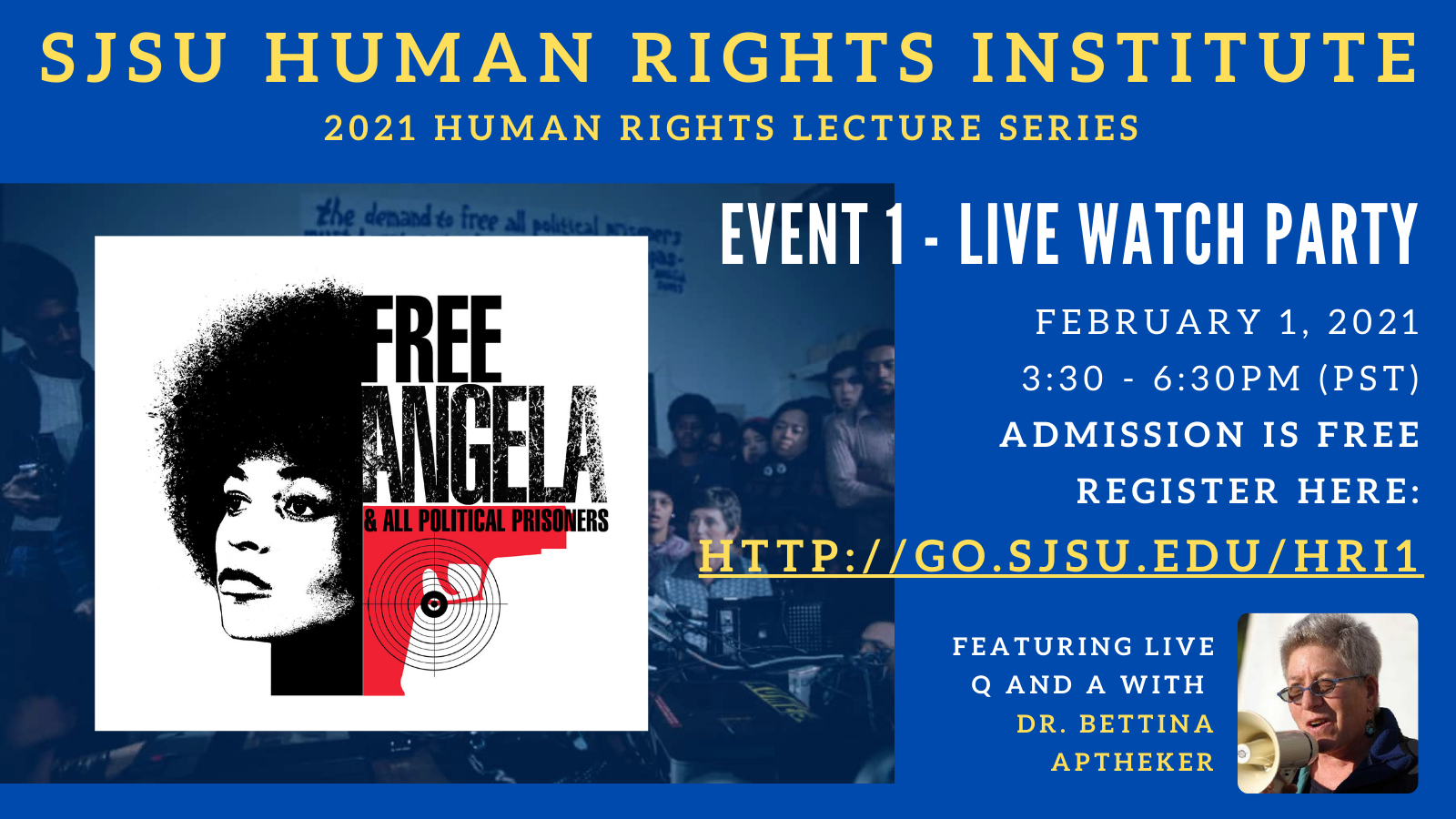 This event will kick off Black History Month and the lecture series with a live watch party of the award-winning documentary, Free Angela and All Political Prisoners, by Shola Lynch (2012). The film details the early life of Dr. Davis as a scholar, political figure, and temporary fugitive who would defend herself in an epic 1972 trial that became an international stage for revolutionary Black feminism. The live watch party will also feature a live Q&A with UC Santa Cruz Distinguished Professor and UC Presidential Co-Chair, Feminist Critical Race and Ethnic Studies Bettina Apethker, ’76 MA Mass Communications, who appears in the film. 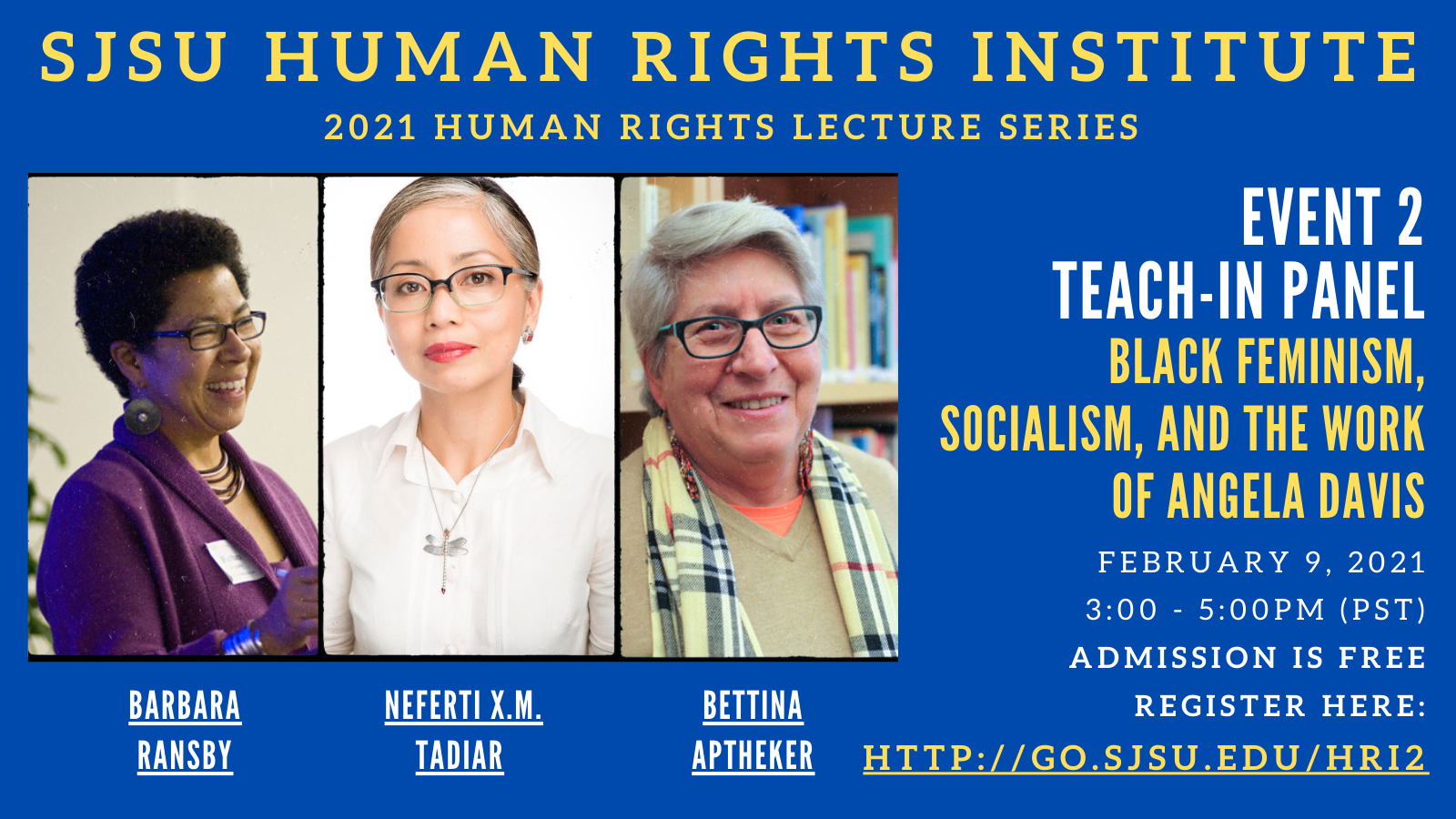 This event features a virtual teach-in panel discussion of Black feminism and socialism by internationally-known scholars, Drs. Barbara Ransby, Bettina Aptheker, ’76 MA Mass Communications, and Neferti X.M. Tadiar. Each guest will present a brief but provocative talk before engaging directly with questions from the viewing audience. 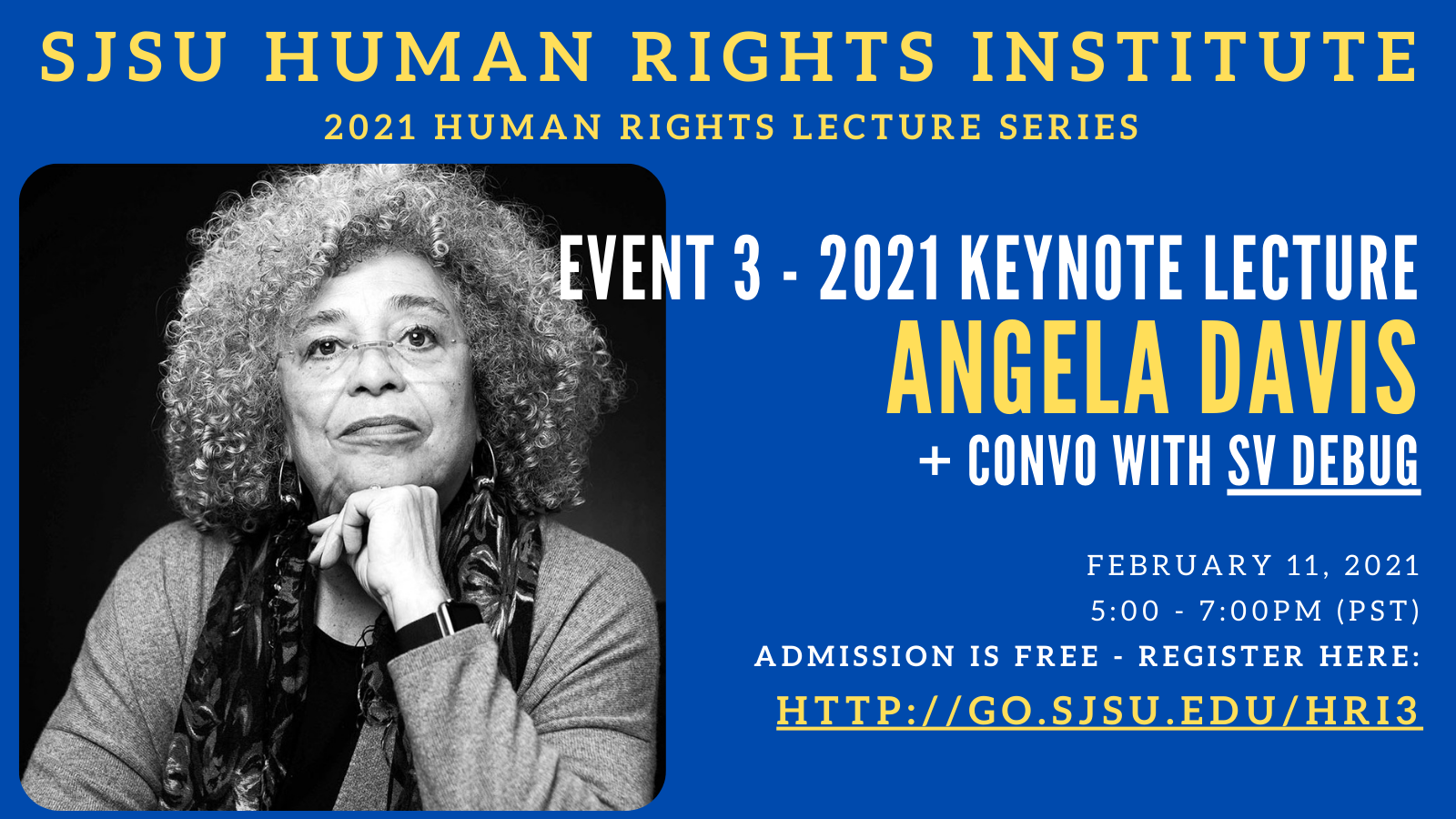 The culminating event for the SJSU HRI Human Rights Lecture Series features the 2021 keynote human rights lecture from Dr. Angela Davis, distinguished professor emerita of UC Santa Cruz. Dr. Davis spoke at SJSU’s 2015 Annual Lecture, joined by many of the various architects of the #BlackLivesMatter movement. Six years later, Dr. Davis returns to discuss the relevance of Black feminism, politics of abolition, and revolutionary praxis to address the human rights challenges of our time. Following the lecture, join for a discussion of how these ideas are shaping political struggles in our region and across the country.

About the Human Rights Institute

Students interested in getting involved with the HRI can do so through enrolling in the Human Rights minor program applying for student internship positions at the HRI, or working with a faculty Human Rights Working Group member on new or ongoing research. To learn more, visit the HRI website.